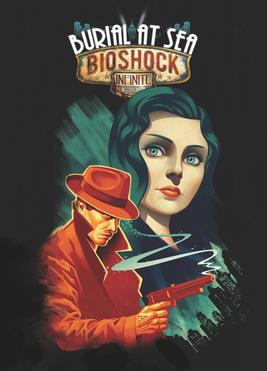 To answer these questions for Bioshock Infinite: Burial at Sea in short form, if you’re the lazy sort, then the answer is this: Yes, and maybe.

I’m a big fan of Bioshock.  I loved Bioshock 1, although it took me years to finish it—I bought it with my first Xbox 360 but never finished it because some Halo 3 came in to my life.  I have never played 2 on a moral objection, since it seems to me they took the parts I didn’t like about Bioshock 1 and made it the whole point of the game.  Hint: It was the annoying as all get-out escort section.

Even though I skipped 2, I was incredibly excited for Infinite.  I didn’t buy a lot of games on release day at the time, but I had Infinite right when it came out and immediately bought the season pass.  I binged on the game and beat it, spent almost as much time talking about what it meant with people, and then put it up on the shelf.  I figured I would play it again someday, and I knew that there would be DLC coming out that would get my interest.

That DLC was Burial at Sea.  The first DLC was just fighting, while this is story.  Not an independent story either; if you haven’t played Infinite to the end then hold off.  Burial at Sea will spoil Infinite all to hell if you play it first, even though it will do so confusingly.

In Burial at Sea we play (again) Booker DeWitt, but instead of a disgraced alcoholic former Pinkerton turned detective in New York…he is a disgraced alcoholic detective in Rapture.  A startling change for our gruff hero.  And this time instead of trying to save Elizabeth, arguably the actual protagonist of Bioshock Infinite, now he is in her employ to find another lost girl.  Which is where things go off the rails.

Is it fun?  Yes.  Bioshock Infinite, despite its flaws, has a tremendously solid combat system.  Even without much preparation I fell back into old habits very quickly.  It felt like putting on an old, familiar clothing simile.  The story is well executed.  The ending left me gob smacked with what I called a “Serious what the **** just happened” moment that I’m still considering.  Sure it, like the ending to Infinite, has some holes that hit you when you get to the refrigerator (http://tvtropes.org/pmwiki/pmwiki.php/Main/FridgeLogic .  Note: Do not click this unless you want to waste hours of your time and ruin your vocabulary in exciting ways).  But the story was interesting and I kept wanting to find out why we were here, and that’s good enough to keep me happy for the few hours that the game takes.

Is it worth the money?  Well…kind of.  It was fun, it was exciting, and Part 2 should be fascinating.  But Part 1 is $14.99 and that is more than a bit painful for a 2-3 hour DLC.  If you have that money to spend I’d advise you to just buy the Season Pass; you get extras for the game, the four dollar Clash in the Clouds, the $14.99 Burial at Sea Part One, and Part Two for however much it costs.  A much better deal, and a lot easier to feel good about the cost when it’s distributed like that.

In the end, it got me.  It made me want more, and maybe that was the point: Give me enough to keep going but not enough to be fully satisfied.  Whether they’re comfortable being in the same category as drug dealers peddling free first hits is up to them, I suppose.